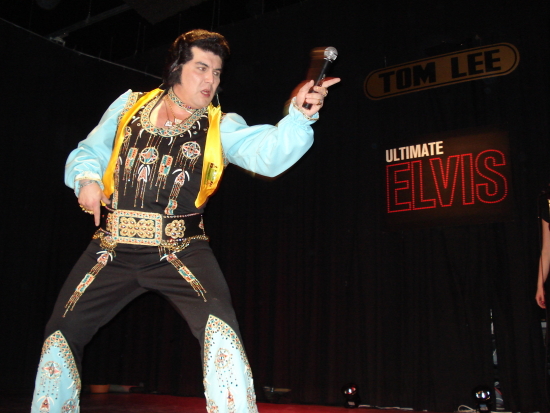 "This could easily be the most emotional ELVIS TRIBUTE SHOW...you will ever see in your life!"

Performing to sold out audiences all over the nation, from night clubs to coliseums, four time international champion Elvis tribute artist, BRIAN "ELVIS" SIMPSON turns in one of the most authentic critically acclaimed tributes around today! Singing all of his life and doing so professionally for over a decade - Brian will leave you on the edge of your seat with his powerful renditions of ELVIS classics - such as MY WAY and the emotional gospel favorite - HOW GREAT THOU ART, and get you dancing in your seats with the high energy production numbers - from the booming 2001 Introduction to the insanely energetic SUSPICIOUS MINDS.

Brian "ELVIS" became a life long fan of the KING after watching the ALOHA FROM HAWAII special in 1973.  But even then he was not ever expecting his career to take the paths that it did.  Always being involved in music and bands as a lead vocalist...Brian never felt WORTHY of being the KING...until the audience demand became so overwhelming that he decided that he would give it a shot - providing he would always be permitted to do his tribute with complete sincerity and reverence to Elvis.  The more events he attended the more his name began to circulate and people began to recognize the power of Brian's tribute...as well as more trophies and accolades began to adorn his mantle.    His show has been described as an "emotional journey" and "passionate" and has been ranked as one of the top ten impersonators in the nation for many years - Collingwood Canadian Elvis Championships!  He has ranked in the top twenty...in the world - Images Of The King World Championships 2002 - and since has taken his show to clubs, stadiums, and coliseums...all over the world!  Brian has shared the same stage with D.J Fontana - Elvis' Original Drummer - The Ed Sullivan Shows, The Sweet Inspirations - Elvis' Female Backing Group - 70's, The Jordanaires - Elvis' Male Backing Group - 50's & 60's , Cab Calloway, Phyllis Diller, The Lettermen, Rita Moreno, among many others!

In addition to performing on a regular basis - Brian is now taking on the roll now as show producer, agent and professor. He has developed ULTIMATE ELVIS which is the most comprehensive tribute to ELVIS ever attempted - with up to half a dozen different performers taking the stage in one SHOW!  Brian has also started what has been coined - ELVIS 101 - an academy where he passes down the secrets and experience of being an ELVIS TRIBUTE ARTIST - in a private school atmosphere.  So far...two of his students have started winning awards themselves and are to be documented in a motion picture release - along with Brian - entitled ELVIS 101 - due out in the summer of 2007.  Brian has also be an official host as well as the M/C and featured performer at the Annual Penticton Elvis Festival - held every year in the last week of June!.

But more importantly - rather than being just a copy of the KING - Brian brings a lot of his own personal raw emotion to every song - which only heightens the listening experience for the audience. After all - many years as an ardent ELVIS fan has allowed Brian to study not only the looks, swagger and moves of the KING - but also try to understand a little more about the man behind the CROWN!

Brian works tirelessly throughout the year with many charities - raising thousands of needed dollars for grateful organizations such as:

as well as teaming up with the OFFICIAL ELVIS PRESLEY FAN CLUB of British Columbia - www.lovingyouelvis.com - to help spread the humanitarian greatness of the KING through his amazing music and stage show.

"This is so important as a tribute artist if you want to carry on the KING's legacy...he was a leader in so many ways!" 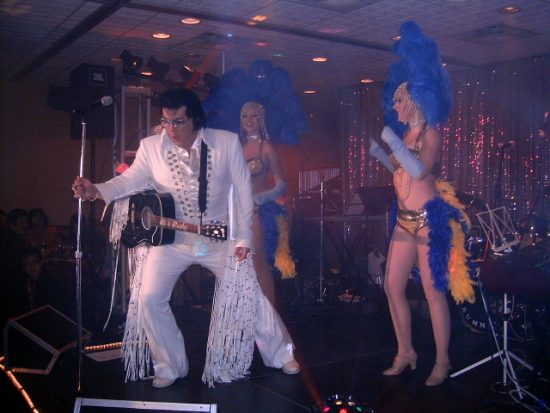 With full, state of the art computer automated lighting and professional high end sound, and option of taking the amazing ULTIMATE ELVIS SHOW BAND (The Official Band Of The Penticton Elvis Festival), or professionally custom made back tracks with a catalogue of music that is unsurpassed by any performer - you will be at the edge of your seat at an ULTIMATE ELVIS show.  From private parties to full concerts - ULTIMATE ELVIS has a show priced for all occasions!

Bring ULTIMATE ELVIS to your venue today...you will remember the night - ALWAYS...for nothing beats the MAGIC OF THE KING!

ULTIMATE ELVIS is booked through
ONE NIGHT PRODUCTIONS